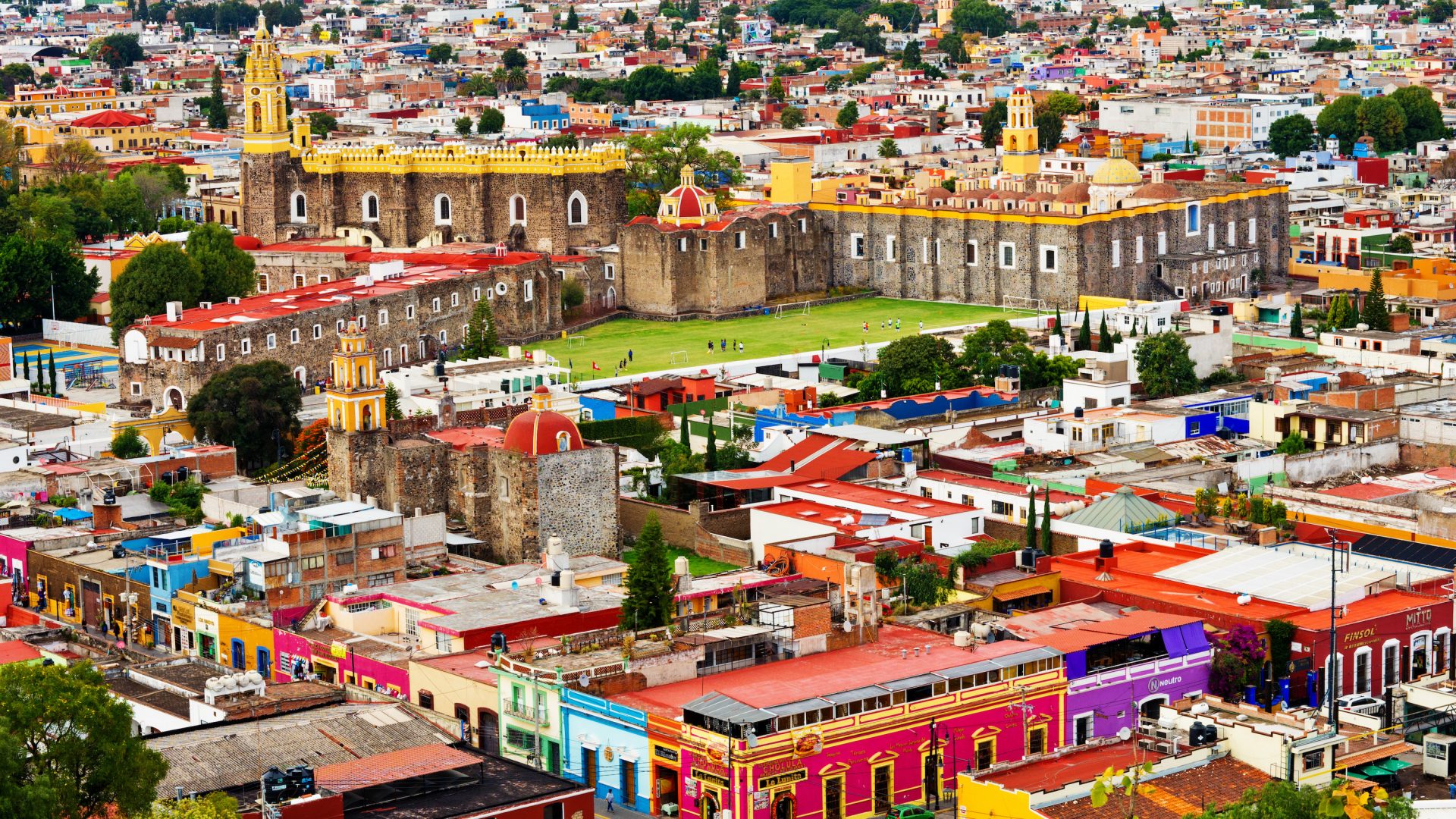 Independence Day in Mexico, el Día de la Independencia, is celebrated primarily on September 16, but it begins on September 15. According to tradition, on September 15, 1810, not long before midnight, a parish priest, Father Miguel Hidalgo y Costilla rang the church bell in the village of Dolores, Guanajuato state to assemble his parishioners. Father Hidalgo   and other leaders, well aware of the American and French revolutions,  had been planning a revolt against colonial rule for late autumn. When they learned that their plan had been discovered and the leaders were to be arrested, Father Hidalgo launched the independence struggle with a speech known today as “El Grito de Dolores”, the cry for independence. Thousands of Mexicans, many without a horse or proper weapons marched in an unruly “army” behind Father Hidalgo carrying a banner of the Virgin of Guadelupe, the Virgin Mary who appeared to an indigenous man in the early 1500’s. A year later, Father Hidalgo was captured, defrocked by the Spanish inquisition and beheaded. However, he is considered the father of his country.  On Día de la Independencia, Mexicans celebrate the beginning of the insurgency against Spanish rule.

A second priest, José María Morelos, took up the struggle, but was also captured and executed. Finally, 11 years after Father Hidalgo’s call for independence,  in 1821, Spanish soldier Augustín de Iturbide switched sides and led his troops in a decisive victory, seizing Mexico City. He proclaimed Mexican independence, with himself as the country’s emperor. The monarchy did not last long because Iturbide spent lavishly on European luxuries and was pushed to go into exile in 1823. For almost 2 years, competing military officers, many of them heroes of the war for independence, jostled for power. Mexico adopted its first democratic constitution in 1824 and elected its first president, Guadalupe Victoria. His most important act was the abolition of slavery in 1825.

Independence Day is a federal holiday in Mexico. Schools are closed along with most workplaces. At 11:00 pm, the current president of Mexico steps out on the balcony of the national palace, rings the original bell from the Dolores Church, and re-enacts Father Hidalgo’s speech. No one wrote down Father Hidalgo’s exact speech, but during the nationally televised event, Mexican presidents always end their speech with ‘¡Viva México!’, and ¡’Viva la independencia!’ Similar re-enactments take place in state capitals and towns all over The Republic, as Mexicans often call their country.  The following day, there are parades, family parties and fireworks.

A culinary masterpiece, chiles en nogada dates back to the end of Mexico’s war of independence and is often prepared for this holiday. This dish is believed to have been invented by the nuns of Santa Monica convent in Puebla and was served to Mexico’s new emperor, Augustín de Iturbide,  when he passed through the city while returning from signing the treaty recognizing Mexico’s independence. An online article from the Smithsonian describes chiles en nogada: “It signifies Mexico’s independence and is made up of the colors of the Mexican flag; red, white and green. The flavors are just as colorful as the ingredients. The sweet, savory, Picadillo stuffed poblano pepper dipped in egg batter, fried, and topped with a rich walnut sauce, pomegranate seeds and parsley”. In many places,  pomegranates are most available in food markets from late summer until around January.”

And Cinco de Mayo? In Mexico, students do not have school even though this day is not a federal holiday. The celebrations are low key, except in Puebla state. In the city of Puebla there is a giant parade on Avenida Cinco de Mayo. Since May of 2012, Puebla has hosted a yearly international mole (pronounced “mo-lay”) festival with acclaimed celebrity chefs as speakers and with tastings of moles (sauces made of several combined chiles, nuts, fruit, spices and sometimes chocolate), created by Mexican chefs. Mole poblano whose distinctive flavor comes from the inclusion of chocolate is another dish invented in the city of Puebla. However, there are many local and even family variations of “mole” in both Puebla and Oaxaca states. “Mole” means “sauce” in the Nahuatl language, spoken by the Aztecs and other indigenous peoples.

The celebrations of Cinco de Mayo are regional because of the Mexican victory in the Battle of Puebla on May 5, 1862. In 1860, at the end of three years of armed conflict between traditionalist conservatives and liberal reformers, Benito Juárez, Mexico’s first indigenous president, announced that his impoverished country was unable to repay the immense amount of money owed to European lenders. Great Britain, Spain and France sent troops to Veracruz, to demand payment. In the meantime, conservatives in Mexico had contacted French emperor Napoleon III, who agreed to help establish a monarchy in Mexico. The first time the French occupation forces attempted to advance towards the capital, the world’s best-trained and equipped army was stopped by a much smaller Mexican army, near Puebla, located halfway between the Gulf coast and Mexico City. Although the French succeeded in installing Maximilian Hapsburg of Austria as emperor for a few short years, he did not enjoy much popular support; Once he was no longer propped up by French troops who withdrew from the country, he was captured and executed. Today, Mexicans still remember their victory on May 5 against the French and against reimposition of colonial rule.

Cinco de Mayo is celebrated more widely in the United states. In the 1960’s, civil rights activists celebrated it and their attachment to Mexican culture and solidarity with their country of origin. Today, there are Cinco de Mayo festivals in cities with large Mexican-American population, particularly in the southwest. These celebrations include food, dance and music performances, parades and often fireworks. However, Cinco de Mayo has become an occasion for many people with no real connections to Mexico to eat tacos and drink Mexican beer and margaritas. Beginning in the 1980’s, companies which distribute Modelo and Corona beer heavily promoted the holiday.

According to Shaylyn Esposito in “What to Really Eat on Cinco de Mayo” (Smithsonian online), “Cinco de Mayo, as celebrated in the United States, shares some similarities to St. Patrick’s Day: a mainstream marketing fiasco that’s evolved out of an authentic celebration of cultural heritage. The typical Cinco de Mayo is a day of eating tacos and drinking margaritas. But, just like you won’t find corned beef and green beer in Ireland on St. Patrick’s Day, you won’t find ground beef tacos, nachos and frozen margaritas in Mexico on Cinco de Mayo.

Here is a recipe for mole poblano with chicken. Although this recipe requires almost two dozen ingredients, it is nonetheless less complicated than chiles en nogada!! I personally would never, ever try this at home!

If you are unwilling or unable to spend a whole day in the kitchen, here’s an easy (i.e. Americanized) version of the sauce to serve with chicken, turkey or over enchiladas. Mole is now also available commercially as a paste.

A video of the “Grito de dolores” in Mexico City on September 15, 2018, El Grito, followed by the Mexican national anthem. See the video here.

If you enjoyed learning about Mexican Independence Day and Cinco De Mayo, share this blog post on social media or send it to friends or family! I would also love to hear your comments or any questions. You can contact me here.