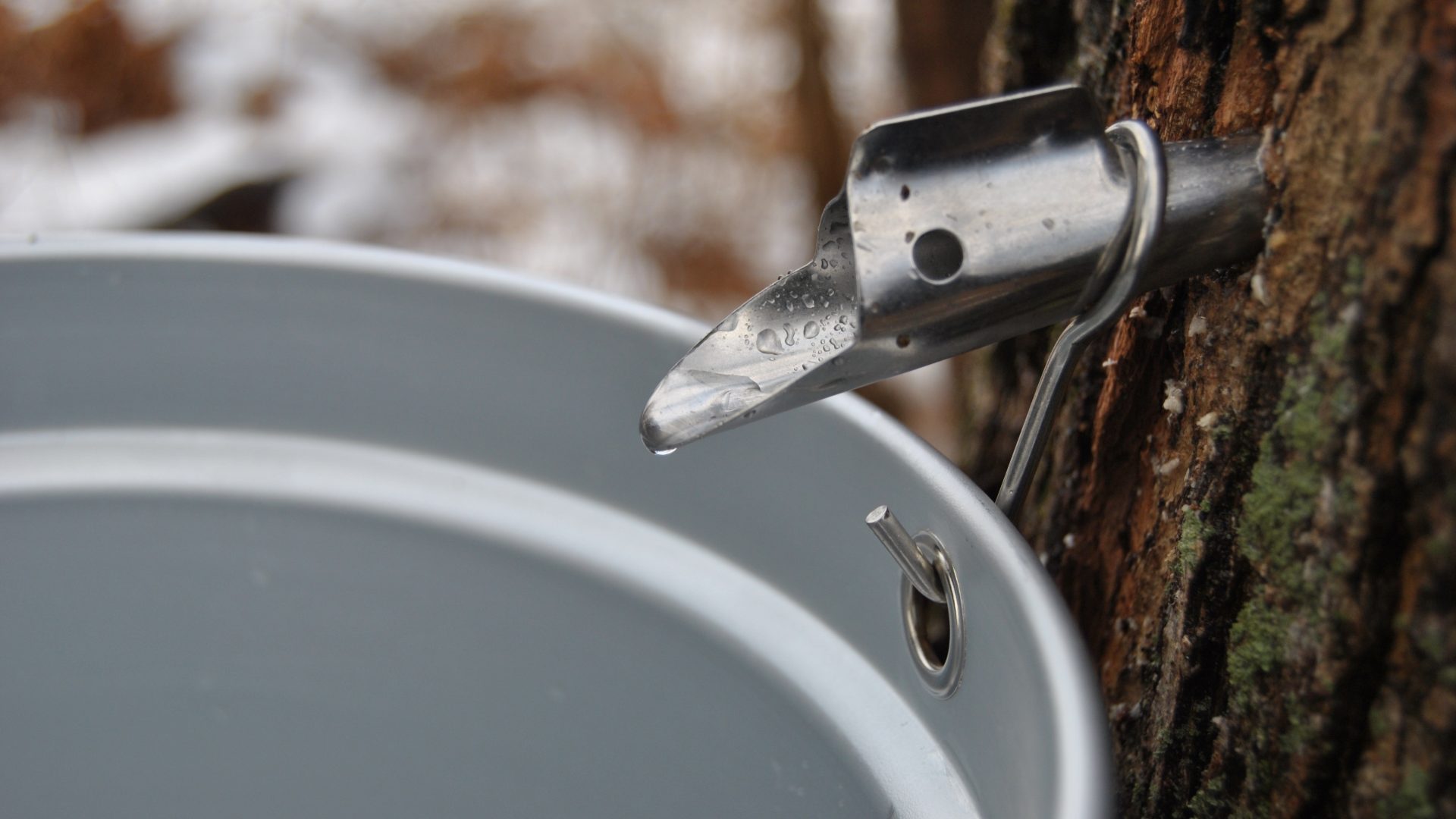 The first robins and snowbirds (both avian and human) are beginning to return north. It’s the time of new life, daffodils and crocuses, dyeing Easter eggs and the Seder. Warmth and light-starved city dwellers linger awhile outdoors before returning to work or class. All over Québec, even if there are still patches of dirty snow on shaded streets, even if it is still necessary to use outdoor heating lamps, tables are brought out for café customers’ enjoyment.

When the days are mild and snow begins to melt, while the nights remain chilly, for approximately a month to six weeks — mid-March until the end of April, — in Québec it is “le temps des sucres” ( “sugaring-off” time).  When the first French settled in territory which they named la Nouvelle France in the early 1600’s, they soon adopted the native peoples’ practice of harvesting sap from sugar maple, black maple and red maple trees, and through evaporation and cooking, of transforming it into syrup. This process was made easier by the use of snowshoes which allowed people to walk on the snow, another gift of native peoples to North American civilization.

At first, the sap (l’eau dérable, literally maple water) was gathered in birch bark containers, and later in wooden, and then finally metal pails or kettles. For a long time, the sap was cooked outdoors in kettles suspended from tree trunks. Since it may take as many as 40 liters of sap to make 1 liter of syrup because the sap contains only 2% or 3% sugar, it was a long process. Around the beginning of the 20th century, maple producers began building small rustic cabins, often called “sugar shacks”, “les cabanes à sucre”. By cooking the sap indoors heat was conserved.

Depending on what time of this short season it is made, maple syrup is classified by its colour and quality as extra-light, light, medium, amber or dark. The province of Quebec produces an astonishing 73% of the world’s maple syrup.  Today, most maple syrup is no longer produced by individual families making enough for their needs for the coming year. People began to spend time having big meals, singing, dancing and relaxing at their sugar shacks.  Especially since the 1970’s, the cabane à sucre is most often a restaurant which can serve large groups. In the interests of efficiency and productivity, the sap is gathered through long tubes connecting the maple tree with the cabane. Even though maple syrup production is an industry, in the springtime, many families and groups of friends may visit a commercial cabane à sucre and return to their rural roots and traditions, if only for a few hours.  If you want to experience a bit of traditional,  rural life, a visit to a sugar shack is a good place to start. Huge meals in the style of rural cuisine will be served family-style, generally at long tables.

Some dishes served are the obligatory pea soup, usually followed by pancakes, ham, pork rinds, pork and beans, tourtière (a beef and pork pie with a hint of cinnamon and/or cloves), and eggs, all served with syrup. There are maple dumplings, maple syrup pie (tarte au sirop d’érable), sugar pie (tarte au sucre), and when you go outdoors to stretch your legs after a long filling meal, there is maple taffy (tire). This taffy is made by pouring hot syrup on snow and winding the long string of candy around a wooden stick before it cools. A friend of mine has pointed out that most Québécois nowadays only indulge in this filling, high-calorie cuisine a couple times a year: perhaps at Christmas and New Year’s Day family gatherings, and at a cabane à sucre usually in the spring. Like their counterparts in the rest of North America, 80% of Québécois are urban dwellers. Québécois cuisine has changed with the evolution of society as a whole. Gone is the need to paddle goods-laden canoes hundreds of miles and to portage around rapids, to clear new farmland by hand, or to perform the strenuous work of a lumberjack.  The need for very hearty, calorie-rich meals has disappeared. The traditional cuisine still lives on, however, as part of Québec’s cultural heritage.  ​Nonetheless, maple syrup and other maple products are still part of Quebec’s modern cuisine and are consumed all year round. There is maple butter,  and maple sugar which is often molded into shapes such as flowers or hearts.  you can usually find maple syrup or sugar pie on restaurant menus at any time of year. When you order a crêpe filled with some combination of ham, cheese, eggs, asparagus or mushrooms, your server will also bring you a pitcher or a bottle of maple syrup.  I also once had the unforgettable pleasure of tasting a maple-filled croissant! There are also packages of maple-filled cookies (biscuits à l’érable) in all supermarkets. Now that I have become accustomed to “pure” maple syrup, I am no longer willing to settle for anything less.

The cabane à sucre is not only a place to eat a giant meal, there usually is traditional music (fiddler, accordion, wooden spoons and singers) and people may be coaxed to try dancing traditional jigs or reels. Some cabanes à sucre offer horse-drawn sleigh rides. There is usually a store where one may buy syrup, sugar and candies to go. In addition to the cabanes à sucre, several small towns in Québec have maple festivals. After 5 or 6 months of often brutal winter temperatures, “le temps des sucres” at the beginning of spring is a reason to celebrate.