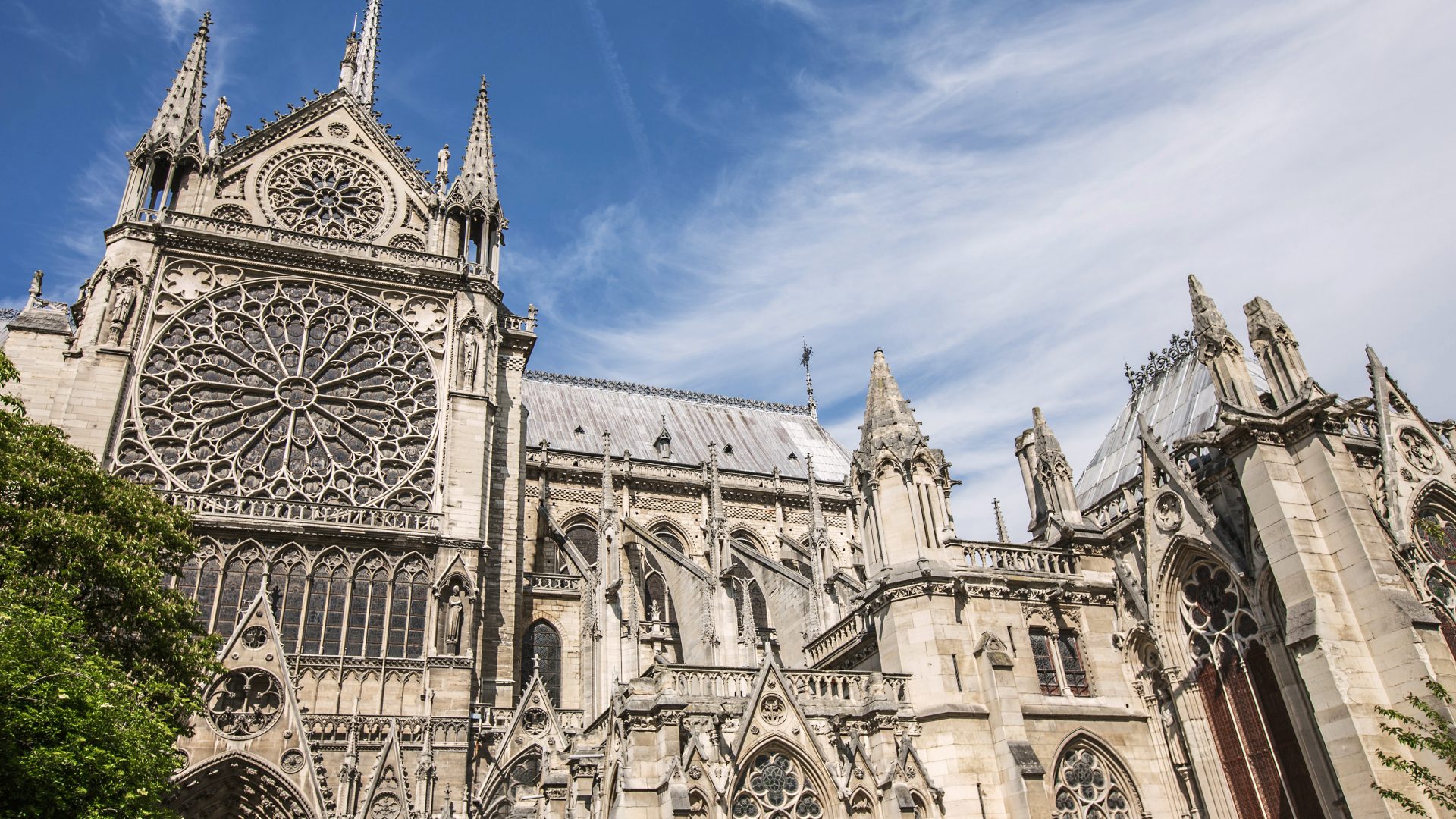 Notre-Dame de Paris: The Cathedral, the Book, and the Musical

In the French-speaking world, Notre-Dame de Paris is the name of a cathedral, a novel, and a rock opera. The gothic cathedral, whose cornerstone was laid in 1163, was completed with the construction of the nave and western façade in 1250. Other embellishments such as porches and chapels were added  during the next 100 years. Inside the cathedral there are stone carvings and stained glass windows.  Flying buttresses act as a support for the walls, which are not as thick as those in earlier Romanesque-style churches. The cathedral’s spire, which fell during the fire in April 2019, was a replacement added during restoration work in the 1800’s.

Notre-Dame de Paris suffered damage and deterioration through the centuries. After the French Revolution, it was rescued from possible destruction by Napoleon I , who crowned himself emperor of the French there in 1804. The cathedral underwent major restorations in the mid-19th century. The popularity of Victor Hugo’s historical novel by the same name in the original French version (1831) helped to win public support for  renovations. Many critics argue that the cathedral itself is the real inanimate hero of the novel. Several chapters of Victor Hugo’s novel describe it in loving detail.  At the time of the novel’s first edition, the author was campaigning to save not only the cathedral, but also other gothic-style buildings from demolition during urban renewal in Paris. Following the 2019 fire, the novel was at the top of Amazon France’s bestseller list.

Almost 170 years after the publication of Victor Hugo’s novel, the French singer-songwriter Richard Cociante, the composer of the musical score and Luc Plamondon, Québécois lyricist collaborated on the creation of a “comédie musicale”, a rock opera rather than an American-style musical. Since its Paris debut in September 1998, it has been professionally performed in 18 countries. It has been translated from French into eight languages. According to the Guinness Book of Records, Notre-Dame de Paris had the most successful first year of any musical show ever.

The musical Notre-Dame de Paris has been recorded at least seven times to date. The original French concept album, which featured Israeli singer Achinoam Nini (aka Noa) as Esmeralda was followed by a live, complete recording of the original Paris cast. The London cast album featured several of the original Paris stars, but only preserved a fraction of the score in English. The musical was also produced in Las Vegas at the beginning of the millennium.

The novel and the rock opera are both set in 1482. The rock opera contains two acts. At the beginning of each act, there is a song putting the rest of the plot in historical context.  Act 1 opens with the song, “le temps des cathédrales” in which the poet Gringoire explains how humanity has tried to reach up towards heaven by building cathedrals. If the cathedral is a product of the Middle Ages, the song “Florence” at the beginning of act II foreshadows the more-than-a-century-long cultural, scientific, and religious revolution, later known as the Renaissance. Gringoire and Frollo mention many inventions and new ideas, such as Johannes Gutenberg’s printing press and Martin Luther’s new doctrines, which will forever change the world.

The Story of Esmeralda

Both the novel and the rock opera tell the story of Esmeralda, a young Gypsy woman who is the object of fascination and desire by several men: the soldier Phoebus, the poet Gringoire, and the archdeacon of the cathedral, Frollo. Ultimately, the man who falls deeply in love with Esmeralda is Quasimodo, the half-blind, half-deaf physically deformed but gentle bell-ringer. The complex plot contains a tangle of emotions: physical desire, loyalty, kidnapping, a murder attempt, religious feelings, both naive love and lust, imprisonment and even an execution.  In addition, class and cultural differences between the Gypsies and homeless on one hand and the educated élite such as the poet Gringoire and the tormented priest Frollo are part of this very rich plot. Songs such as “Les Sans-Papiers” (“The Undocumented”) give Notre-Dame de Paris an almost contemporary feel. “Les sans-papiers” builds to a crescendo of feeling as the persecuted Gypsies and outcasts seek sanctuary in the cathedral, a practice which has been revived by immigration rights activists today but which has its roots in medieval Christian tradition. Another song, “Belle”, became popular as a single throughout the Francophone world, and was selected as song of the year in France. In “Belle”, Quasimodo,  Frollo and Phoebus sing about their different feelings towards Esmeralda. Quasimodo’s growing love for Esmeralda is full of reverence. In contrast, Frollo sings about his growing physical atraction in spite of his vow of celibacy, and Phoebus (watched jealously by his fiancée, Fleur-de-Lys) expresses his wish for an affair with Esmeralda before his upcoming wedding.

In spite of the complex plot, without having already read the novel, it is very possible to follow the story simply by listening to the full, live recording of the original Paris performance. Throughout his long career, Luc Plamondon has often created 2 or 3-minute portraits in lyrics which others set to music; In Notre-Dame de Paris, he creates characters who tell their story, interact with each other, and express their evolving emotions over a period of a couple hours in 53 songs. During live performances, non-actor dancers are on stage, but the singers who play the roles of Quasimodo, Esmeralda, Gringoire, and the others simply perform the songs as if it were a concert and not a theatrical work. The producer of the London performance, Michael White, countered harsh critiques by stating: “This is not a musical but a rock show with a strong story-line. I think it is difficult for dramatic critics who have to understand everything from Shakespeare to Harold Pinter to understand that.” Eventually, despite poor early reviews, Notre-Dame de Paris found success in the West End of London during 2000.  It has been revived there in 2019 with the original French lyrics replacing the earlier, awkward English translation.

The original Paris and Canadian casts included singers from France and Québec. It had a revival in France with many of the singers from the original cast in 2016 to 2017. Immediately after the fire in the spring of 2019, an online petition received over 70,000 signatures on the first day. The petition asked Cociante and Plamondon to revive the show as a means of fund-raising. In addition to a concert revival, there may be an album for charitable purposes.

The following are YouTube links to songs from the musical, in both the original French version and the English translation.

If you enjoyed learning about Notre-Dame de Paris, share this blog post on social media or send it to friends and family! I would love to hear your comments or any questions. You can contact me here.